The secret to sparking a conversation with ANYONE Yes, that’s right. The secret to sparking a conversation with anyone is…A Smile. I have spent years testing this theory across the world. It has led to hundreds of fascinating conversations, countless new connections and friends and many memorable experiences.

To be honest, it probably began at birth as I’ve always been a smiley person. Seriously, smiling is an almost automatic reaction when I make eye contact with someone. It can melt a stern look, comfort shy eyes and sparks a simple yet warm connection with another human being. AND, it’s truly universal. I am horrible at learning languages (ask any of my language teachers or former foreign flatmates) but smiling, I’m top of the class. I’m learning that it’s one of my comparative advantages as I travel the world.

Ever since I moved to Europe in 2008, I’ve been more consciously experimenting with smiling at strangers.  I received a few double takes in the streets of Barcelona and got a few confused looks in trams in Zurich but overall, the smiling thing really works. I expanded the smiling experiment to Asia. In the jungle of Angkor Wat, I cycled about 27km (it took 2 days for my legs to retain consciousness but that’s another story) and randomly interacted with tons of locals and tourists alike. I started shooting silent smiles at people on passing bicycles and tuk tuks, even when passing by people in crowded temples. Some of the tourists looked startled at first then flashed a smile back however the Cambodians, they were naturals. They smiled with their mouths and their eyes in an instant.

I also rented a bike to tour around Gili Trawangan island, off the coast of Bali Indonesia. The smile experiment was a huge success; a quick smile usually turned into a friendly conversation. In fact, smiles struck up so many conversations that I only had time to bike half the island before needing a mango lassi to cool off.

A few months ago, I threw the smile experiment into full throttle in South America.  Smiles there were instant. I enjoyed a local bus ride in the mining city of Potosi, Bolivia. Being a high altitude mining city, one would think that the people might be as grim as the air but it couldn’t be farther from the truth.  Whilst on the bus, the woman behind me started singing along to the latest Bolivian pop song blasting from the communal speakers, I immediately turned around with a huge smile to offer my hand as a microphone. At first she looked startled but within a split second she shot me a wide grin, laughed then continued singing.

When I smile at people walking down the street,  95% of the time I get wide grins back- some of them toothless yet wide. Even babies tightly clad to their mother’s backs are natural smiling professionals and you can imagine that their innocent smiles are enough to warm anyone’s heart.

Don’t get me started on how quickly Colombians smile back. Colombians may be the friendliest people on Earth. Seriously. In the three weeks I traveled across Colombia in February, a simple smile led to invitations to people’s homes, trying new desserts in the streets of Medellin, a city tour in the back of an antique jeep and a 45 minute conversation on a Cartagena sidewalk.

To  fellow travellers, expats, entrepreneurs and friends, when you are in a new environment it just takes a few facial muscles to allow a window of opportunity to connect with a stranger…..I dare you to try the smile experiment and share your stories in the comments section below!! (insert big smile here). 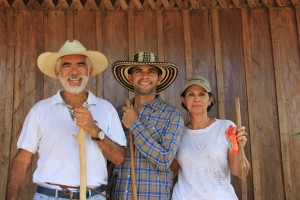 For Leadership Tools and Practical Wisdom to help you Be Seen and Be Heard in the workplace, join our Global Leadership Community.

“Isn’t it time to own your awesomeness and leverage your diversity as a strength? We’ll show you how.”

Our most in-demand trainings are now VIRTUAL so you can keep teams & ERGs inspired, engaged & learning during covid-19. Click here for details